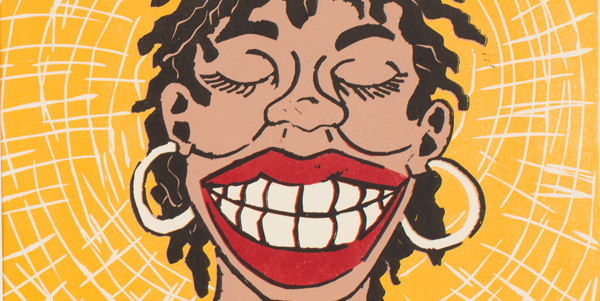 I’m so honored to help initiate the reigniting of Wanda’s website through this blog. You may know Wanda was my mentor and friend. I’ve written about how I met her and she inspired me to start my blog, Les Femmes Folles, and to continue making art and to pursue a master’s degree in art history. Of course she also inspired me as a person and strong feminist deeply, just through her being.

To kick-off this new blog, which will feature posts from Wanda’s friends, fans and everything in between (Wanna contribute? Connect on the “Contact” page!), I’m going to focus on three art historical frameworks from which Wanda drew: printmaking, pop art and feminism. If you’re unfamiliar with her work, you should know that Wanda created provocative art around gender, beauty and race, and was perhaps most well-known for the “Black as Pitch, Hot as Hell” series of paintings and prints of curvy, Black women in pin-up style.

As an undergraduate student at San Francisco Art Institute, Wanda was taken with printmaking because of its broad appeal, both in its mass materiality and its affinity for social and political satire. Wanda’s BFA thesis was a book of linocuts called, “Growing Up Black, Growing Up Wanda” (above, below). The series of diptychs present intimate impressions of humorous social commentary and musings, evoking the printmaking tradition. With clear personal ties, the contemporary works, with her satirical flare, connect with the viewer on a grounded level, recalling the mass appeal of print. The book form also brings an intimate encounter with the viewer. This linocut from the same series, “Tom” (above) depicts more emotion from the faces behind the self-portrait, recalling the jabbing satire of early political prints. She puts herself, a black woman, at the forefront of the narrative, while reminding viewers of the continuous awareness of being in a black body, making a potentially difficult subject accessible with her playful style. Thanks for reading—my next post will examine Wanda’s inspiring transforming of the representation of the black female body through her pin-ups and other work. Stay tuned and continue scrolling through her website and reflecting on the breadth of Wanda’s oeuvre…