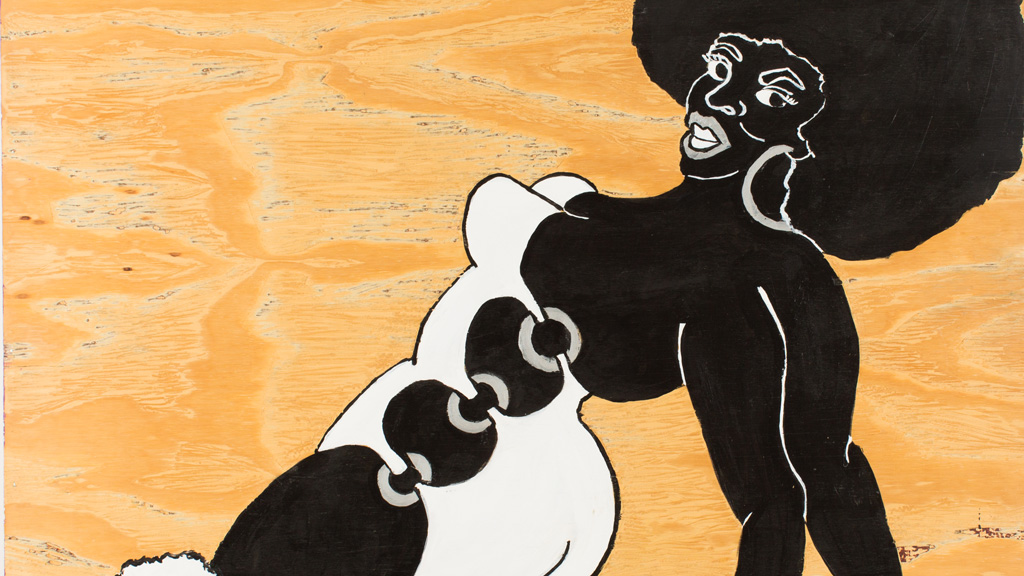 The first time Wanda and I got in trouble together was with the Aug 14, 2003 edition of Omaha Pulp, a short-lived alternative newsweekly.

Aside from the publisher, Pulp had 2.5 staff, and we all took on multiple identities to people the paper with contributors. Our art director wrote music reviews as a critic named Dirt; we used a 1970s-era photo of my mother in a beehive to serve as astrologist for a horoscope written by my boyfriend; our advice columnist was Baby in a Walnut Shell, a little plastic doll (inside a plastic walnut shell), bought off some Japanese novelty shop on the internet.

Wanda’s sensibility fit perfectly with ours, and we featured Leslie Prisbell’s profile of her as our cover story: the cover image was “I Have Big Lips,” a linocut from Wanda’s autobiographical book of large-scale images, Growing Up Black, Growing Up Wanda. The image — a portrait of the artist with her eyes closed but her grin wide and toothy – captured much about Wanda’s personality and vision. It was a tribute to caricature and cartoon, while also analyzing stereotype at the same time; but mostly it was a celebration of beauty and confidence, alive with Wanda’s charm, delight, sharp wit, and talent. (In Wanda’s characters you can see her appreciation for comic book art, with influences ranging from “Friday Foster” of the early 1970s, to the work of R. Crumb, to the fashionable characters of Jackie Ormes.)

But what got us into trouble was what was inside: we published her linocut of a black body and a white body in a naked embrace, and this led to the loss of a few vital advertisers. And Wanda spoke frankly (and in fascinating detail) in the interview about how she’d put herself through college as a phone-sex operator. When the article appeared, Wanda was called into her boss’s office at an Omaha artists’ residency for a scolding – she ran the risk of offending the board of directors, she was told.

Here’s a quote from Wanda, in Leslie’s article, about how she reconciled her job in the phone sex industry with the feminist perspectives of her art:

“Eventually I had to quit [the job as operator]. I didn’t like the way that it made me feel towards men… You think, ‘Am I exploiting women, am I getting the customer all juiced up so that they can go out and do the thing they’re talking about?’ You can’t even begin to allow yourself to think that you are… You have on the one side these women who say, ‘I’m just using these men; they’re pathetic,’ But then you hear some of these fantasies and think, God, this guy really hates women.”

Whenever Justin (aka Dirt), Pulp’s art director, sent the paper’s layout off to the printer, he shouted through the offices “Shut it down, motherfuckers!” and we were off to La Buvette in the Old Market for bubbly. Wanda became a regular at our table, and our group’s conversations which crawled late into the evenings inspired me to write my third novel, Devils in the Sugar Shop, in which a character named Viv does artwork much in the vein of Wanda’s:

Her art tended to make people nervous… ‘You should do more of those pretty shoes,’ Viv’s mother had told her. For a time, Viv had made lithos of the designer shoes she’d splurged on one summer to console herself after a wicked breakup – python slingbacks, calf-trimmed pumps, fur clogs, kitten-heeled patent leathers. She’d had prints of a pair of Ferragamos and some Bettye Mullers and some pink leopard-print Claudia Ciutis in shows around town…  [from Devils in the Sugar Shop, 2007]

Wanda, in real life, did do some lithos of shoes, but the reference above is really to her series of prints, “Big Woman Little Dress,” inspired by dresses she bought during a love affair. Again, a quote from Leslie Prisbell’s Pulp article: “I was dating this guy and I bought these dresses because I wanted to look sexy for him. I was feeling sexy, and I was having sex, and it was wonderful. And he broke it off. Just out of the blue. And very rudely, I must say. When I look at these, it’s like a journal of the relationship. It’s also about the form. There’s definitely a figure in these, a body. Hips, belly. I like that.”

Wanda’s affection for fashion, for style (she did artwork based on jewelry too), and how it all informed her life, and how it informed culture, and conceptions/representations of race and gender, led her to create art that was both commentary and revelry, criticism and indulgence. I had the opportunity to write the gallery notes (excerpted below) for “Bougie,” her exhibit at the Sheldon Museum of Art at UNL, which featured a series of covers for a fictional women’s magazine focused on beauty standards:

Ewing portrays women in the act of posing, women possibly conscious of their degradation yet nonetheless seducing us with their self-confidence. For Ewing’s women, the beauty myth becomes just another beauty mark; politics likely seem silly to these cutie-pies. And yet the politics of fashion are what give Ewing’s work its sinister and satirical bent. Just beyond the coy winks and the toothpaste-peddling smiles and curve-hugging skirts of these fine black women is the sense that the images aren’t just about them. Caught up in it all is the photographer, or the art director, or the advertiser, or the pornographer, or the doll-maker, the various co-conspirators in the invention of glamour. All unseen, their shadows drop between us and the artwork, darkening the humors of the women on display. [from “Bougie” gallery guide]

My partner Rodney Rahl and I, in the backyard of our home in West Omaha, premiered another of Wanda’s series on beauty, race, and sexuality: plywood portraits of black women in classic pin-up-girl poses. She eventually called the series “Black as Pitch, Hot as Hell,” but at the time she’d only just finished the pieces and hadn’t named the project yet; as a matter of fact, she was finishing them during the show, with her hammer and chisel, carving into the plywood, touching up the paint. It was a windy day, and we spent a fair amount of time chasing the 48”x48” pieces every time a breeze plucked them from their easels.

Even when not writing about Wanda directly, I find our work still dovetails today, her perspectives on fashion, on gender expectations, on sex and sexuality, on pop culture, on race, on body image, all intertwine with my own as my characters evolve. I’m still very much in conversation with my sweet, gorgeous, brilliant, inventive, magnificent friend. As I thumbed through Devils in the Sugar Shop, to summon Wanda’s spirit to step forward, step forward she did… as I read the line “the sound of the sleet that salted against the windowpanes,” I realized I was hearing that exactly, against my windowpanes just now, as winter arrived.