Wanda’s work touched so many people during her life. Even from a young age, her work spoke to many people. 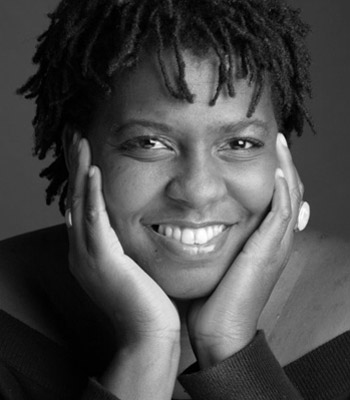 After Wanda passed away in December of 2013, Bob Carlson, the previous chair of the University of Nebraska at Omaha (UNO) Art Department came to our family and asked us if we would be open to having the University develop a scholarship in Wanda’s name for art students. Because education is important to our family and to Wanda, it was a no-brainer for us to say yes. Wanda’s work touched so many people during her life, even from a young age, her work spoke to many people. We know that during her own college days, Wanda struggled a little bit to make sure she had the supplies she needed to create her work. Once she became an Assistant Professor, her work was given a platform for students to learn, ask questions, grow, and explore their own voices.

The Wanda Ewing Memorial Scholarship supports undergraduate students pursuing a degree in Art and Art History in the School of the Arts where Wanda taught visual arts from 2004 to 2013. When the scholarship funds started, the monies came from friends and fans of Wanda who wanted to give in her name. So, we were lucky to get the scholarship started right away, with its first gift given in 2014. The family’s criteria for scholarship recipients include a shared viewpoint of how art speaks to them or guides their life, which is how Wanda’s work spoke to her and the world around her.

Since her death, two students have been awarded $1,000 each to help them complete their areas of study.

We are so proud that Wanda’s work has touched so many students at University of Nebraska at Omaha when she was teaching there and now as she has passed on. The Ewing Family continues to support the arts; the voice it gives our world and role it plays in helping people see themselves through this medium.

UNO is the state’s metropolitan university and home to the most racially and socioeconomically diverse student body in Nebraska. The School of the Arts is the No. 1 rated art program in the state and one of UNO’s fastest growing schools. Your generous gift to this scholarship helps honor Wanda’s legacy and supports the next generation of talented artists and storytellers.

Please consider a gift to the fund by donating online. Visit the following link for the donation page: Wanda Ewing Memorial Scholarship

You may also donate by check. Please make a check to University of Nebraska Foundation and mail to address below. Note “Wanda Ewing Memorial Scholarship Fund” on the check.

For more information, contact Camille Allen at camille.allen@nufoundation.org or 402-502-4119.

Thank you,
The Ewing Family

I began in Springfield, Missouri and followed my father’s career to Denver, before settling home in Omaha. It’s been a great place to grow up with consistent opportunities for my education. Day to day, I am my younger brother’s full-time caregiver. He requires assistance in every facet of living because of a severe brain and spine injury that occurred as an infant. Yet, he’s continued to endure and share a contagious smile for almost twenty years. Much of my work is inspired by him and the way that trauma has sculpted both of our lives to date.

The months following graduation from UNO’s 2D BFA program, I’ve spent learning and unlearning how to paint by imitating different styles and mediums of artists I admire in NYC, Detroit, Chicago, and LA. There is a sneaking hope inside of me to apprentice for one of these artists within the next year (if they’ll take me). I feel it would be a radical transition out of being my brother’s caregiver of twelve years, but I’m eager to embrace a change.

I regret having not known Wanda Ewing personally, but through stories and artwork, her influence in my life is undeniable. Her portrait that hangs in Weber Fine Arts always reminds me of the many hearts she touched of my friends and colleagues. I am humbled and inspired to belong to a community which has been fostered by Wanda Ewing, and continues to. I am honored and grateful to have been selected for this scholarship in her memory for its aid in my work and education. This scholarship greatly assisted in the cost of preparing paintings and drawings for my 2017 BFA exhibition, titled Slow Fun.

Slow Fun is a series of interrelated paintings, drawings, and assemblages. Slow Fun refers to stoicism in moments of grief and the process of appreciating that grief. Slow Fun is used loosely—not necessarily a joyous, crawling event—but a prolonged participation in life which is to be observed, digested, and reconstructed.

These paintings, drawings, and assemblages exist as individual artworks, but also contribute to a thematic hive. Translating imagery through multiple mediums establishes a deeper, nuanced physicality and invites déjà vu. The high contrast and sharp line of graphite speaks clearly with a scratch. Oil paint slurs its speech with a pull, drag, and blur. Assemblages remain silent as relics sealed in time.

My imagery is autobiographical, akin to self portraits, wherein I am substituted by the pinball interactions between subjects of the composition, engaged with (or disengaged from) friends and family. Slow Fun attempts to solve emotional memory puzzles, replacing missing pieces with symbolism, both redeeming and damning. 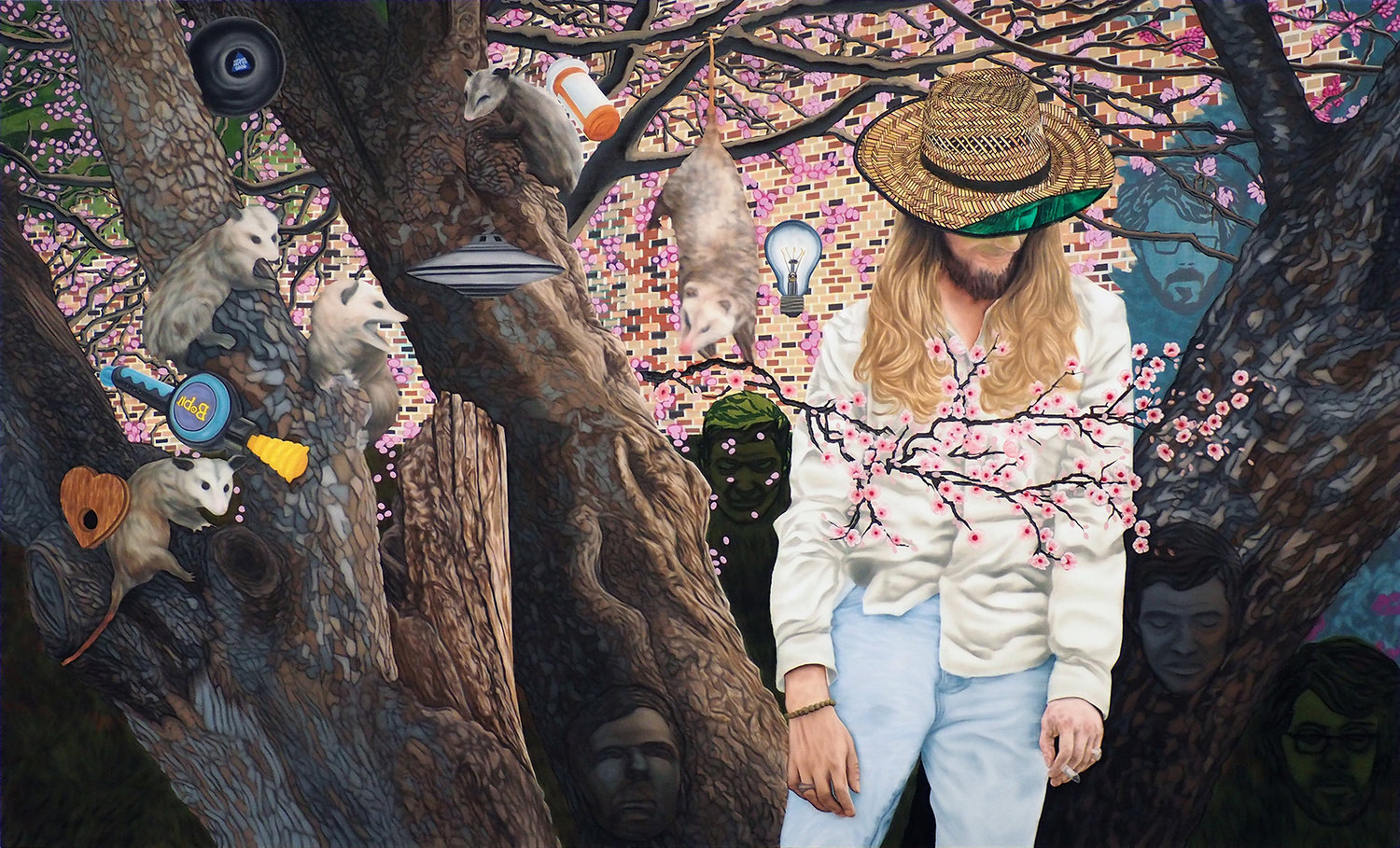 Both as an installation artist and as the first person in my family to earn a college degree, I was immensely honored to receive the Wanda Ewing Memorial Scholarship in May of 2015 during my studies to earn a Bachelor of Fine Arts in Studio Art and a Minor in both Art History and Marketing from the University of Nebraska at Omaha.

Installations don’t hang confidently in galleries: neat, crisp white labels a respectful distance to the bottom-right whispering the price of removal to entryways or museums. Putting oneself through school, without guidance, isn’t easy: a slow, cyclical process of work and study, night shifts and morning classes, late nights in the studio and pre-dawn opens, day to week to month to year(s). How gratifying then, to receive a lifeline for a “portfolio of work deemed to reflect the artistic and professional standards and ideals of the late Professor Wanda Ewing” in recognition of a passionate pursuit of installation as a means of artistic expression, connection to others, and lifelong learning and inquiry. Not to mention the support given in my earning a degree – a very powerful foundation for empowerment of myself and others that I will always have. That these were similarly valued by Professor Ewing and her family enough to support folks they’ve never met leaves me altogether awesomely grateful for entrusting me, like Wanda, to strive to make a difference in this world.

I endeavor to make good on that invested confidence and trust. As a student, I graduated cum laude in May of 2016. As a Program Assistant for the Tulsa Artist Fellowship, I’ve helped to launch an ambitious new fellowship and residency program in Tulsa, Oklahoma. As an artist, I strive to push both my artistic and professional practices forward despite the lure of inertia. As an academic, I’m exploring the who, what, when, where, and why of potential graduate studies. And, as someone with immense respect and admiration for Wanda’s dedication to the arts, to her own art, and to her students, I hope to continue ever progressing, creating, learning, and advocating – striving to honor her legacy in so doing. Thank you for this opportunity on behalf of myself and my fellow Wanda Ewing Memorial Scholarship recipients. 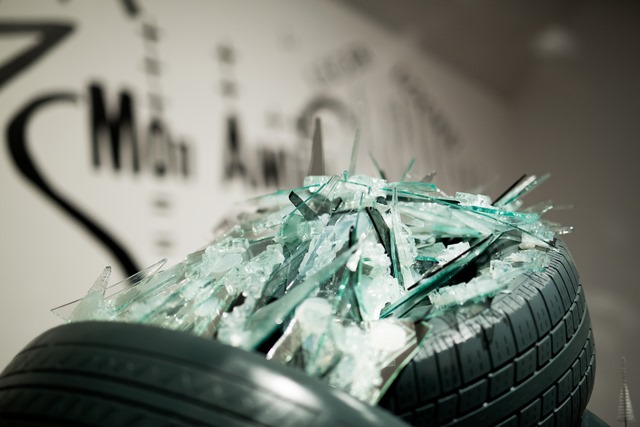