Along with Wanda’s subtle nods to hip-hop culture were her more direct critiques. Video Grrrlllz, a series of drawings inspired by video vixen Karrine Steffans, show barely-clad black women with punching bag-heads, a metaphor for how women have been treated in the hip-hop industry.  The woman shown is strong, though pushed down, a commentary of the hip-hop industry which proved controversial, so much so that she was not accepted into a hip-hop exhibit due to the negative connotations. Her provocation was beyond her time and worth further examination, especially as it relates to the theme of misogyny in Hip Hop culture. 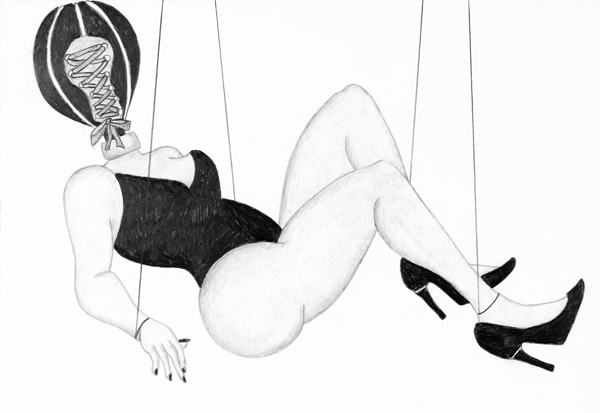 Like an artist she admired, Mickalene Thomas, Wanda appropriated art historical imagery, assessing contemporary society. In this early print below, Wanda parodied Manet’s Luncheon on the Grass, reversing roles by having two clothed black females and one nude, white male. They are having a picnic in a cemetery, a photo Wanda took in Paris, emitting a dark atmosphere.

In her referencing the rich symbolism of these art-historical influences we see Wanda’s attraction to them—the broad appeal of traditional printmaking, the use of satire to make social commentary and to critique representations of the body and specifically the black female body, in spoofing popular media and parodying art historical imagery. Wanda’s unique self-critique combined with her empowering figures presents a distinct perspective with plenty of room for further inquiry. I hope this provided an impetus into further examination and interest in Wanda’s work.